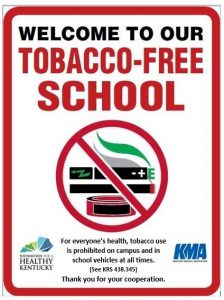 LOUISVILLE, Ky., October 26, 2020 – Schools in 101 districts and 51 state operated technology centers across Kentucky are displaying a total of nearly 12,000 metal signs and window or door stickers announcing that their campuses are tobacco-free, thanks to a partnership among the Foundation for a Healthy Kentucky (FHKy), the Kentucky Medical Association (KMA) and the Kentucky Foundation for Medical Care (KFMC). The Tobacco-Free for Students partnership provided the free signs, as well as more than 20,000 policy change announcement cards, as an incentive for districts to adopt tobacco-free policies, which are shown to reduce youth tobacco use.

“Our goals was not only to encourage more school districts to adopt tobacco-free campus policies, but to help change the culture of Kentucky’s school environment to a place where tobacco use is simply not the norm, no matter what time, what day of the week, or what event is happening on campus,” said Ben Chandler, FHKy president and CEO. “These signs are a reminder that we care about our kids’ health so tobacco use has no place in Kentucky schools.”

“We know that tobacco-free laws work by reducing not only the number of users, but by reducing the effects of secondhand smoke as well. These new signs will help improve compliance with the new policy and prevent thousands of Kentucky youth from becoming addicted to tobacco products. We’re excited that our communities will become healthier as a result of this initiative,” said KMA President Dale Toney, M.D.

“National smoking rates have declined in recent years. But we’ve seen a sharp uptick in new users of e-cigarettes, which pack many of the same deadly chemicals and harmful ingredients as cigarettes. The growing number of teen users is particularly alarming, and we’re hopeful the signage provided by the Tobacco-Free for Students program will help curb this epidemic,” said KFMC President Shawn Jones, M.D.

The Kentucky General Assembly passed a tobacco-free schools bill introduced by Rep. Kim Moser in 2019. Her bill was supported by the Coalition for a Smoke-Free Tomorrow, of which all three signage partners are members. The Coalition, comprising more than 220 organizations across the Commonwealth, supports policies proven to reduce tobacco use and exposure to secondhand smoke and aerosol.

A map of school districts that have adopted tobacco-free policies is available here.